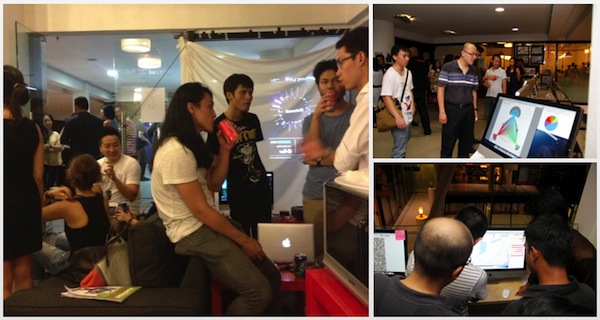 Asia: a huge, diverse, and rapidly changing society. One could even say it has high volume, variety, and velocity. Here in Malaysia we value a good technology festival, and we’ve been discussing Big Data for at least a year (the veracity of this claim is backed up by the list of previous Big Data Malaysia meetups, which is by no means the only local group discussing these issues). Now that I’ve paid nominal (and perhaps somewhat cheeky) obligatory homage to the 3+2Vs of Big Data, let’s get on with what actually happened during Big Data Week 2013 in Kuala Lumpur.

Since we were so eager to go, we kicked off a bit early with TRANSIT: Distillation on April 19th (i.e. the Friday just before Big Data Week 2013 officially began). Hosted by VLT, and co-sponsored by Experian and iTrain, this was our opening party, which we spiced up with a data visualisation showcase. This event had people coming and going, but at it’s peak it had a crowd of about 80 people: a good mix of creative professionals, software engineers, entrepreneurs, investors, and more.

Off to a good start, the very next morning the local Python User Group organised an all-day data analytics workshop, where 30 hackers got together to work on some sample challenges from Kaggle, using Python of course.

In recognition of the clear relevance of Big Data to their industry, Telekom Malaysia Research & Development hosted a meetup on Tuesday afternoon catering primarily to their staff but open to the public. The crowd of 70 telco professionals benefitted from an entry-level introduction to Big Data from the perspective of 4 major industry players.

We did not intentionally plan a single “signature event” as part of Big Data Week, but as we saw the registrations come in for Big Data: Strategy, Practice, and Research it became clear that this was going to be slightly bigger than the others, so MDec generously upped their already major sponsorship for this whole-day event. Ultimately on Wednesday we checked-in 222 attendees. The participants comprised a mix of engineers, executives, managers, and academics from across a number of different verticals including oil & gas, telecommunications, banking, publishing, marketing, and many more. It is our hope that this event significantly expanded awareness of Big Data opportunities to mainstream corporate Malaysia, as well as government policy-makers.

The Performance Management Delivery Unit (PEMANDU), an agency under the Prime Ministers Department, recognises the transformative potential of Big Data to Malaysia’s economic development. To contribute towards awareness-building, they put together the following clip featuring a couple of our panelists (these interviews were recorded on-site at our “Big Data: Strategy, Practice, and Research” event, therefore this clip is another direct contribution of Big Data Week):

Later that Wednesday, Netapp hosted a highly technical Storage Networking Industry Association meetup, which included high-quality presentations on NFSv4, object storage, and data protection. Despite a manic thunderstorm that flooded parts of KL and even took out parts of the cellular phone network, this event managed to bring together about 10 experienced infrastructure professionals from various vendors, for a highly interactive and frank discussion on the realities of enterprise technology use vs. the ideals of Big Data.

nVidia’s GPU Technology Workshop was already scheduled to happen on Thursday – but when Big Data Week rolled into town, they decided to add a Big Data track. This was fortuitous, as of the 3 concurrent tracks (the others being Computational Finance and Media & Entertainment), the Big Data track proved to be the most popular – yet more evidence that this technology concept has captured mainstream interest in this market. The total combined crowd of about 180 benefitted from technical talks from academics and industry specialists.

To many, Big Data and The Cloud are practically inseparable. AWS presented their take on it on Thursday afternoon, with a seminar on the use of some of their platform offerings to accelerate development of data solutions. Their talk was followed by over an hour of interactive discussion amongst the 25 or so participants, with an AWS architect providing expert advice.

Thursday evening saw the first ever NoSQL Asia event, sponsored by Praxis BT. NoSQL Asia is a new movement that’s working towards development of a regional conference, and this event was essentially a “beta test” – and a superbly successful one at that, proving that this region is ready for a dedicated NoSQL conference. This event brought together a mostly deeply technical audience of about 60 people to discuss in breadth and some depth “the technology behind Big Data Week”, as they appropriately billed it.

Malaysia’s final contribution to Big Data Week was Friday afternoon’s panel discussion on Data Journalism. The timing of this event was especially relevant: Malaysia was just a week away from what turned out to be her closest and most bitterly fought General Election in history, the aftermath of which has seen a mushrooming of people analysing and reporting on what few reliable data sources are available.

Taylor’s University hosted this event of about 100 participants – a crowd which consisted primarily of journalism and communication students and practitioners, though there were plenty of techs and others in attendance as well. Participants were treated to a great overview of what data journalism is, what it can do that traditional forms of journalism cannot, as well as a frank and open discussion of what’s missing in the Malaysian context. As an added bonus, participants got a fascinating live glimpse of what a sophisticated DoS attack on a major local news portal looks like, real-time on Google Analytics.

Most people seem satisfied with the scale of what we achieved – in fact more events might have been too much – but it’s encouraging that we actually came close to holding 3 additional events: “Big Data in Healthcare & Life Sciences”, “Big Data in Banking & Finance”, and a hackathon to go with the Big Data Week Challenge. These events didn’t happen only because of issues around logistics, and they’re likely to happen in some other form in the near future.

Another encouraging sign is subtly communicated in all the above photos. Close inspection will reveal that Big Data Week in Malaysia attracted all flavours of participants across the various events – from hackers and creatives, to decision makers in suits. This bodes well for future initiatives, as success will require investment, business sponsors, and people with the skills to deliver.

It may be true that Malaysia currently lags behind in Big Data capabilities, but as we’ve demonstrated through our Big Data Week contribution, the commitment to closing the gap is significant. After all, it takes significant commitment, material investment, genuine expertise, willingness to collaborate, and high effort from various organisations, partner groups, and individuals working above and beyond the call of duty to make a festival like this happen. Through our combined efforts, we’ve proven that this stuff matters to us, we know a little bit about it, and we’re going to keep learning.